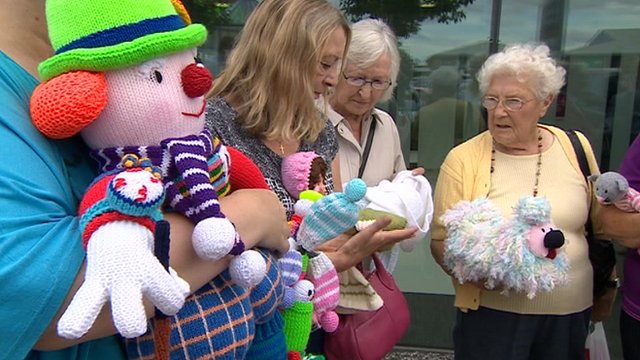 (Click on the photo above to watch a short news video)

You may not know it to look at them, but you are surrounded by radical, subversive women.  They carry with them raw materials and tools to perform fundamentally world altering acts.  They blend into their surroundings.  So much so that you probably have some in your home, your family, your work place.  You probably even see them plying their trade in meetings, on busses, in parks and coffee shops, and have no idea what you are looking at.  They are able to recognize each other and often congregate right out in the open (and, really, is there any better place to hide?) to share secrets and tricks that further their individual and collective goals to undermine the fabric of our built-in-obsolescence, consumerist society.

Actually, I’m pretty sure the folks reading this know all about it.  I’m pretty sure most of you are members of this not so secret society.  You know I’m talking about you.  Yes, you!  You knitters and crocheters out there.  Not to mention spinners, weavers, felters, quilters, sewers, etc.  You radical fiber artists and crafters.

Maybe some of you never thought of yourself as radical or subversive.  But consider this: the most fundamentally radical act we humans can engage in is the act of creation.  Think about it for a moment.  Creation.  Even the word has a decidedly mythological, one might even say biblical, ring to it.  This act of creation is one usually ascribed to divine forces.  “In the beginning…” as the story goes.

And for us, “In the beginning…” there is some fiber that we got from somewhere; from a plant or animal who isn’t using it anymore.  It’s pretty formless though perhaps not entirely void.  Then we do something to it.  We change its form.  From a handful of fluff, through human agency, we spin a thread or mat it together or sculpt it into three dimensional form.  And we find that it is good.  Maybe then we take a thread and perhaps add other threads or change its color or lay it back over itself.  We play with it and twist it and spin it until it becomes yarn.  And we find that it is good.  We take that yarn and wind it around rollers and criss-cross it over and under and in between itself, or we form it into loops and pull loops through other  loops until we have woven or knitted or crocheted a fabric.  And we find that it is good!  We shape that fabric into garments to clothe ourselves and our loved ones, functional or decorative items to enhance our homes, objects of art that lift our souls.  We find that it is so good, that we keep on doing it.  It becomes so much a part of us that we forget what a magical, radical act creation actually is.

Know the other thing I find interesting about the ladies from the UK who have been asked to leave their local library and find meeting space elsewhere?  All the things they create are for babies and children, and some of the things they create are meant to train midwives and teach breastfeeding mothers.  The whole gestation and rearing of children thing is probably the most complex and mysterious creation act of all.  Yet it happens so regularly, so frequently, it is normalized.  We take it so for granted that we rarely stop to think about it.

Yet, even when we aren’t thinking about it, we are drawn to it.  And those around us are drawn to it, too.  The ladies of Crumlington were invited by their city’s council to begin this group, and more ladies joined.  Over the three years they have been active, this group has attracted more members and expanded their list of recipients.  They have created something compelling and productive.  So compelling and productive they are now the targets of some uncomfortable feelings coming from the very council that invited them in the first place.  Are knitting needles really dangerous?  Well, I’ve left some size 1 dpn’s on the sofa and gotten a nasty surprise the next time I went to watch a little TV, but that hardly constitutes a public safety hazard.  (and serves me right for not taking proper care of my tools)  Are they really so noisy?  I suppose a large group of women chatting, even in their most careful tones, could be difficult for some folks to overcome.  But the sound of their needles is cited as one of the areas of complaint.  Really?  The rhythmic clicking and swishing together of knitting needles is the sound of creation.  Is that really part of the problem?  All that creation can get a little uncomfortable?

When you birth a child or finish a shawl, you’ve brought something new, something you’ve built by hand, from your soul, into the world.  And who knows how the world will be changed by it?  Maybe that’s the most dangerous things about creation.  In subtle but profound ways, each time we make something where nothing used to be, the old world changes and is no longer the old world, but a brand new one.  The outcome is unknowable, and fear of the unknown is the most potent fear of all.  But that’s what creation is all bout.  Make something new, know that it is good, and wait to see what happens.  Dangerous stuff, indeed.

I hope the knitters of Crumlington and everywhere will keep on knitting out loud.  I hope you all will keep on creating.  These radical acts sustain each of us personally and the whole world collectively. And if it occasionally gets loud or messy or dangerous, bring it on over here.  We’re having another meeting of the radical, subversive women’s secret society right out here in the open any minute now.  You’re welcome to join us any time.

← We still love yarn for Knitting and Crochet
I have yarn dream. →

One Comment on “Noisy dangerous knitters? You go, Girls!”